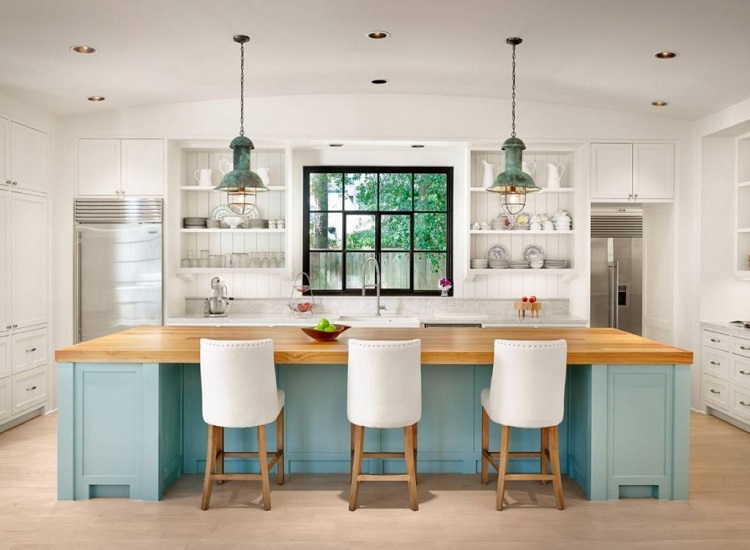 Your Kitchen Floor Plan The Foundation of a Great Kitchen

Yippeee!! You have decided to give your kitchen a makeover. You’re excited as you make a list of all the new things you want to have in your new kitchen. You rush into a shopping spree, buying all the items on your list.

But wait!! Have you considered the space availability in your kitchen? Take the time to see where these items could be placed in your kitchen. An accurate map (called the kitchen floor plan) is your most useful planning tool. Before you go on your shopping spree take stock of your kitchen.

Before you venture out in a new territory do you make sure you understand the terrain properly? Similarly, before venturing out on a kitchen revamp it would be wise to prepare a map of your kitchen. This is called the kitchen floor plan. It is a way to measure the space available in your kitchen and plan where each item would go.

How do you make your kitchen floor plan?

Simple. Sketch out your present layout (don’t worry about scale now), drawing windows, doors, islands, and other features. Then measure the elements along each wall at counter height. After you finish measuring all the items along one wall, total all the figures; then take an overall measurement of the same wall from corner to corner. The two figures should match; measure the height of each wall in the same manner.

Got the rough sketches of your kitchen? Its time, now, to convert them into an accurate floor plan. Now draw your kitchen layout to scale on graph paper—most kitchen designers use 1/2-inch scale (1/24 actual size). Some standard drafting paper with 1/4-inch squares and a T square and triangle greatly simplify matters.

The fun starts now. Your new kitchen floor plan!! Kitchen layout is a process that includes weighing basic layouts; blocking out area that has storage, countertops, and work centers; and double-checking efficient heights and clearances. There’s no perfect sequence—the trick is to work back and forth.

The ‘work triangle’ in the kitchen floor plans

Don’t be intimidated by these jargons. I’ll simplify things for you. The term ‘work triangle’ was first introduced in the 1950s, when kitchen layout studies were carried out. The three sides of the triangle connect the refrigerator, sink, and range (or cook top). These are the three things that are accessed the most while working in the kitchen. Hence it is necessary to keep these in an easy to access area and distance. An efficient work triangle reduces the steps a cook must take during meal preparation. Designers have been evaluating kitchen efficiency by means of the work triangle. The ideal sum of the three legs is 26 feet or less, with individual legs no shorter than 4 feet and no longer than 9 feet. Ideally, the work triangle should not have any traffic flow.

You have two cooks in the kitchen you say? How does the ‘work triangle’ fit with the concepts like two cook layouts, kitchen islands & peninsula work centers? Don’t disregard the importance of the work triangle in planning kitchen efficiency. It may be useful to sketch in multiple triangles to cover different requirements.

One-wall plans are most often seen in vacation homes and small apartments. Advantages: This floor plan saves the most space. Disadvantages: One-wall plans are the least efficient for the cook. Because there is usually a door at each end, through traffic is a common problem. It is less efficient as there is a lot of movement back and forth- from the cooking range to the refrigerator to the sink. Other considerations: One-wall kitchens work best when the sink is in the center, flanked by the refrigerator and cooking range. If space will allow, include 4 feet of counter space on each side of the sink.

Parallel walls mark the corridor-style plan. Advantages: The corridor kitchen’s compact floor plan is ideal for small spaces. Parallel walls let the cook move easily from one workstation to another. Disadvantages: The biggest drawback is that the work triangle is in the path of traffic unless one doorway is closed off. Another negative is that it does not have a gathering spot for kids or guests. Other considerations: Plan at least 4 feet of space between the opposing counters. For maximum efficiency, consider pairing the sink and refrigerator on one wall with the cooking range centered between them on the opposite wall. A variation on the theme: Corridor kitchens are simply kitchens with entryways on each end. This gives a corridor kitchen a more open feel; however, the probability of traffic interrupting the work triangle can make a corridor kitchen harder to work in.

This efficient, versatile plan usually puts one workstation on each of three walls. Advantages: Storage and counter space on three sides maximize efficiency, and the dead-end floor plan ensures that traffic doesn’t interrupt the work triangle. Disadvantages: You might have problems if you have multiple cooks. This plan does not accommodate multiple cooks as well. Other considerations: For a U-shaped kitchen you require at least 9 x 9 foot space, anything less won’t provide the minimum 4 feet of work space in the center of the room. For maximum efficiency in a large kitchen, locate one workstation in a freestanding island.

The L-shape plan has two workstations on one wall and the third on an adjacent wall. Advantages: This layout is more space-efficient than a U-shape plan, especially if the main workstations are located close to the crook of the L. Disadvantages: This layout does not lend itself to small spaces. There should be at least 4 feet counter space between the two workstations that share the same wall Other considerations: The arrangement of workstations is critical: Ideally work should flow from the refrigerator to the sink and then to the cooking range and serving area. The area opposite the angle formed by the two sides of the L often is an ideal spot for an eating nook.

The island floor plan has freestanding workstation, usually incorporating either the sink or cooking range. Advantages: This plan works best for large kitchens in which the work triangle would exceed the 26-foot rule if all three workstations were located against walls. The “26-foot rule” dictates that for maximum efficiency, the perimeter of the work triangle should measure at least 12 feet but not more than 26 feet. Each side should measure at least 4 feet but no longer than 9 feet. (Note: Old-timers may remember the “22-foot rule”; it’s the same idea, but not as well-suited to today’s larger homes.) Disadvantages: Island plans are not well-suited to kitchens where two work stations must be on opposite walls. Other considerations: Allow at least 42 inches of aisle space on all sides of the island; in a two-cook kitchen, 48 inches is better. In a large kitchen, the island is a convenient location for specialty countertops, such as butcher block for chopping vegetables or marble for rolling out pastry dough. In a small kitchen, consider a portable island such as a rolling cart or table. It won’t accommodate a bonafide workstation but will give you extra counter space where you need it. If the island also includes an eating counter, keep it well away from the cooking range.

When one end of an island is anchored to a wall or line of cabinets, the result is a peninsula plan. The peninsula kitchen packs all the versatility of an island kitchen, but doesn’t require as much floor space.

The cooking range and sink work equally well on a peninsula; moving the sink from against a wall isn’t a problem if there is a basement with accessible plumbing. Like islands, peninsulas give the cook a workstation with a view into an adjacent room rather than just toward a wall. After meal preparation, a peninsula can double as a snack bar or buffet as well as a room divider to help route traffic away from the kitchen.

Painting Kitchen Cabinets Can Save Money And Get the Look That You Want in You Kitchen.

How To Create The Kitchen Of Your Dreams